Most students want some attention

Don’t you think that most students want some attention? Some of them even become jealous when others get noticed.  Look at Ashley – she gets new hairdos every week, wears fancy clothes and stilettos.  Ashley thinks that she is the babe who is entitled to be admired for her beauty by everyone a one hundred percent of the time. She can’t stand it if someone else from the class gets even a little bit of praise. Leah is jealous of her.  Rosie gets her kicks from gossiping. Sheldon and Topanga may be different from the others but they want recognition too. They are both what you might call nerds and love to brag about their intellectual superiority.  You might say that they are both show offs and think that they know it all.  It’s not surprising that they get along so well with each other.  After all, who else would talk to them.  Then there is Sara.  She does not seek a sycophant, not even a pat on the back but is popular anyway.  She gets noticed when she helps someone.

Sheldon:  Topanga, you wouldn’t believe what happened yesterday.  My dad was talking to Mr. Ping.  My dad has a piece of land which is 11 meters by 11 meters but it has a boulder sitting in one corner.  The bolder is very high and occupies an area of 2 meters x 2 meters.  He’s not happy about it.  Mr. Ping said that in the same locality he has land plots which are 13 meters deep and 9 meters wide. He was ready to trade it, and so I told dad right away that this was a fair trade. Not counting the area covered with the boulder, Mr. Ping was giving my dad the same area of land in exchange.

Topanga was not quite sure and took out her calculator.

Sheldon said with a smirk: You can say that again.

Topanga, however, was ahead of him and said: Isn’t this what our math teacher asked us to do in our math class?  Remember, how she gave a long lecture on how we should think of algebra and geometry together?  She asked us to use geometry to prove that (x+y) x (x-y)=x2 – y2.

Sheldon: Yes, and every one in the class said that it couldn’t be done.

Sheldon: You mean, I did it.  I will show it to our math teacher tomorrow.  I’am sure she’ll love it.

Topanga knew that Sheldon would not share the credit with her.  He was going to get all the praise from the math teacher. It bothered her.  She couldn’t stand it.  She even had a hard time sleeping that night.  She went to school but looked sad and tired.  Sara noticed Topanga and asked her why she was upset.   Topanga told Sara how Sheldon would not give her credit for the proof.  Sara whispered some words in Topanga’s ear and wrote something in her notebook.  With this Topanga felt really happy.  Sara had showed her a way to regain her honour with Sheldon.

Sheldon showed the proof to the math teacher who asked him to go the board and demonstrate it to the whole class. The class was in an awe when Sheldon proved how one could connect algebra to geometry.

Sheldon’s happiness was interrupted when the teacher told the class that Sara had provided the proof for this problem to her immediately after the last class.

Of course, Ashley was getting itchy that now Sara was getting all the glory. Suddenly  Topanga rose her hand.

Topanga: Here are pairs of numbers for multiplication.  I challenge the whole class that I can do the multiplications faster than anyone with a calculator.

The math teacher looked at Topanga’s notebook with amusement.  All the multiplications could be done with what Sheldon had just proved to the class.  Here are the numbers which Topanga had in her notebook.

The math teacher: Sheldon and Sara.  Why are you not even trying?

Sheldon: Topanga said any one with a calculator.  I don’t have one today.

Actually, Sheldon was amused and had seen what was happening.  He was hoping that Topanga would share credit with him for her act. The response to the teacher was just his excuse. Sara did not reply. She just kept watching the reactions of Sheldon and Topanga.

Topanga’s act continued.  The teacher would write the numbers on the board and Topanga would answer before anyone else.

Then there was a surprise.  Ashley shouted out the answer before Topanga could.  Everyone’s attention was now directed at Ashley.

Rosie whispered to Leah:  Ashley saw the last pair of numbers from Topanga’s notebook and wrote them down.  She did the calculation and was waiting to outsmart the nerd. You know Ashley hated that Sara, Sheldon and Topanga were getting all the attention.

Sheldon was not happy that Topanga or the math teacher didn’t give him any credit for these multiplications.  The math teacher was thrilled that the students had taught the class how to connect algebra with geometry and simple arithmetic calculations. 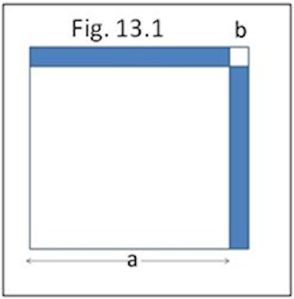 Find areas of each of the four sections.