Christmas comes on Dec. 25 each year

Millions of people celebrate the birth of Jesus Christ on Dec. 25, orthodox Christians celebrate it a few weeks later and some researchers even think that he was born in the spring.  It seems that the Roman Catholic Church settled on Dec. 25 for many reasons of convenience or practicality. Never the less, it has become the day to celebrate the birth of Jesus Christ and not his birthday. Christmas has become more of a family and a commercial holiday rather than the celebration of birth.  As a commercial holiday,  non-church goers also celebrate it. The celebration may include making the days before Christmas the busiest days for the airports.  Christmas trees may be used to decorate the house which itself may be made beautiful with blinking colored lights and signs. Of course, gifts are exchanged.

Some historians give credit for the start of the commercialization to F.W. Woolworth  who brought some glass ornaments for the Christmas trees from Germany, and this trend became a large industry in the US.  Others credit  this evolution to the development of Christmas trees being put on wooden triangles in the eighteenth century.  Santa Claus, Rudolph the red-nosed-reindeer,  Black Friday and  Cyber Monday were all instrumental in converting Christmas into a full blown commercial holiday. Gift giving has developed as the main if not sole purpose of this holiday.  Don’t criticize the shrewd merchants and their advertising because their goal is to make money just like it was the purpose of the church to give everybody a fixed day for the celebration. The gift giving may have been related to the birth of Christ even before his birth.  After all the three Wise Men from the east came bearing gifts.

Christmas gift trends have changed over the years.  Today, it is rare to knit a sweater as a Christmas gift for a dear one. The old fruit cake gifts also seem to have disappeared.  The emphasis is on electronic or utility items, chocolates and cakes.  The gift of chocolates and cakes may also be sinful if you think of diabetes and the problems associated with it.  Some folks prefer to gifting boxes of nuts and other dry fruits.  They can be stored at least as long as the fruit cakes, and have now become more fashionable.

Appu Patel has a corner store in Portland, Washington (this store is made up as is the rest of the story).  It is a typical convenience store selling cigarettes, bread, milk, pop, beer, some fruits, vegetables and other knick knacks.  He has now been running it for a decade and making a decent living from it.  Being the hard working entrepreneur that he is, last year he decided to expand his business by making special gift boxes for nuts for the Christmas season.  He purchased raisins and different kinds of shelled nuts. The wholesale costs in dollars per pound were pine nuts 20, peanuts 1, almonds 4, cashews 6 walnuts 5 and raisins 2.

He made three types of 2 pound fancy looking boxes. The first box was for the relatively rich. It contained one pound each of pine nuts and almonds, which cost him a total of $20 + $4 for two pounds, or $12 per pound.  He thought that he would add 50% of this cost to cover for the box and his profits, and sell it at $36.

The second box was for the low income customers. It contained one pound each of peanuts and almonds, thus costing a total of $1 + $4 for two pounds or $2.50 per pound.

The season went very well and he made a good profit. He was happy and wanted to continue for the next Christmas. His 14 year daughter Bani saw him sitting there with a sad face.

The Price of Almonds Has Gone Up

Bani: Dad, you are looking sad.  What’s the matter ?

Appu: The almond prices are on fire.  Last year, their wholesale price was $4 per pound but now it has jumped to $7 per pound.

Bani: Then what will you do dad ? Last year you had almonds in every box that you made. Can we raise the prices this year ?

Appu: Then, no one will buy our boxes and we will lose a lot of money.  We will have to do something else.

Appu: I do not want to change the prices.  The cost of all the other materials is the same.  Last year you had worked hard  to help me with making the boxes and I hope this year too you will do that.  I do not want to decrease our profits because we have to save some money for your education.

Bani: Dad, I have an idea.  I will tell you after a do some calculations.

Bani’s calculations: Almonds cost $7 per pound and pine nuts cost $20 per pound. If one box contained x pounds of almonds and 2-x pounds of pine nuts, and the total whole cost per pound was kept $24 total or at $12 per pound, then my equation will be:

Bani was very happy and showed her idea to dad with all the calculations.

Appu: Kudos Bani.  You did a clever and diligent work. You know, when I was in my primary school, my arithmetic teacher showed me a method for mixtures and proportions. Almonds cost $7 per pound. So we make a cross as shown in the picture and write a 7 under almonds on the left top. Then we write 20 for the cost of pine nuts on the top right. In the middle we write 12 for the desired cost of the mixture. We determine 12 minus 7 to be 5 and put it in the right bottom. The same way 20 minus 12 = 8 goes in the left bottom. This gives us 8:5 as the desired ratio of almonds and pine nuts in the mix. It is the same answer for 2 pounds, use 16/13 pounds of almonds and 10/13 pounds of pine nuts. 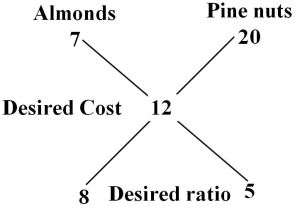 Bani: This method is so simple and you did not even have to use algebra.

Appu:  In the primary school, we were taught only arithmetic. Anyway, this was a good solution for one box.  What about the almond and peanut box ?

Bani:  I will do this calculation by your method. Last year the cost of the almond-peanut box was $2.50 per pound.   Peanuts cost at $1 per pound is the same but the almonds now cost $7 per pound.  Making the mixture and proportions cross, the desired proportion of almonds to peanuts is 1.5:4.5 = 1:3.  So dad, we will have to put half a pound of almonds and one and a half pounds of peanuts in this 2 pound box. 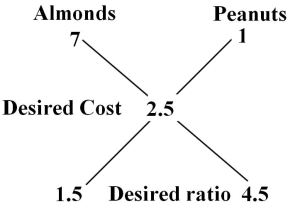 Appu: This will look bad.  I have to think whether to make this box smaller, increase its price or put some other salty snack in it.

Bani:  Dad, you could just rename the box peanuts with almonds rather than peanuts and almonds.

Appu: You know Bani, I will do that.  Now, are you tired or do you want to do the most difficult one ? This four item box was our most popular one.  Remember, it had half a pound each of almonds, cashews, walnuts and raisins. Its cost to us was $4.25 per pound.  You know that the current costs of the items are almonds $7 per pound, cashews $6 per pound, walnuts $5 per pound and raisins $2 per pound.

Bani decided to solve this problem by making two groups: almonds and not the almonds which meant cashews, walnuts and raisins.  The price of the not the almonds group with equal amounts of each item in it would be (6 + 5+ 2)/3 = $4.33 per pound.  You cannot add almonds at $7 per pound and bring the cost down from $4.33 to $4.25.

Bani was a determined girl and did not concede.  May be she could do this by making one of the following groups: 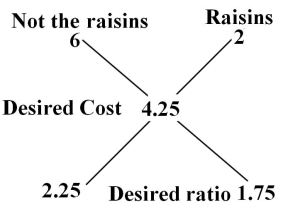 Finally she made a not the raisin group. That would cost (7 + 6 + 5)/3 = $6 per pound. May be she could add raisins costing $2 per pound and bring the cost down. So she made the mixtures and proportions picture. The final desired cost was $4.25 per pound. That gave her a desired ratio of 2.25:1.75 or 9:7.  It meant that for the 2 pound box, 2 x 9/16  or 9/8 pounds would be not the raisins which was 3/8 pounds each  of almonds, walnuts and cashews.  The raisins would then be 7/8 pounds. May be there are several other solutions to this problem but this is what she ended up recommending to Appu because the cost of this box came out to be  $8.25 which was the same as the last year.

Appu liked this solution, thanked Bani and reminded her that she had to go for her tennis lesson.

Corner Gas was a Canadian sitcom that ran for 2005-2009.  In a small prairie town there was this rag tag gas station and a convenience store. It was owned by an old senile guy named Leroy whose all purpose word was jackass. The problem below is not from that show.The gas station sold silver (87% octane), gold (89% octane) and platinum (91% octane) quality gas. A customer came in and wanted 20 liters of gold gasoline but he was told that only the switches for silver and platinum are working. The customer was fuming mad. Leroy said, “Just mix 10 liters of silver with 10 liters of platinum, jackass.”  Did Leroy calculate it right?

Answer: Draw the mixture proportion picture with the percent octane silver, gold and platinum.  Here gold is the desired mixture. The desired ratio is 2:2 which means equal amounts of each silver and platinum. So 10 liters of each is the correct answer even if Leroy was rude. 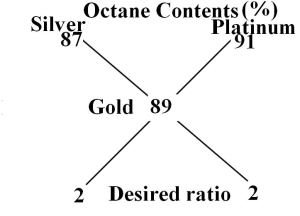