George volunteered to organize the little league soccer games for West Town.  Part of the reason he volunteered was that he was the proud father of three kids who wanted to play soccer.  Their names were Jenny, Tom and Tinku.  Of course, Tinku’s friend Tanya wanted to play too. They were chatting.

George: 100 children have signed up to play in the West Town Little League soccer game. A soccer team normally has 11 players including a goalie. Additional players are also allowed as substitutes.

Tanya: How big does the soccer field has to be?  Also, is there a goal net?

Tinku: We can just use pylons to mark the goal area if there are no nets.

George: The sizes of the soccer fields depends on how old the players are.  For adults, a soccer field is 60 yards wide and 100 yards long.  The field can be much smaller depending on the ages of the kids.

Tanya: Is the field size different for boys and girls?

Tinku: Do you know the ages of the kids.

George: Based on the registration forms, 75 players are between 6 and 8, and the remaining between 9 and 11.  There are no players older than 11 years.

Tanya: Then we can still have 8 teams, 6 teams for the younger players and 2 for the older.

The other question was which parks could be used for the soccer field.  So George started phoning around. He found out that the only available park was New Village Park. It is free on Tuesday and Thursday evenings and is 60 x 80 yards that is a total area of 4800 square yards.

“Will it work?” George wondered.

Tanya and Tinku brought a pencil and paper to make sketches.

Best use of available space

Jenny wondered how fair it was to have the 8 year olds play in the smaller field with the younger players but accepted that to be necessary because they couldn’t make separate teams for 6, 7 and 8 year olds.

George: I am not sure it is right to say how many fields can be made based on the total area alone.  You also have to think of the arrangements .

Jenny: The players are not going to come by themselves.  Someone would have to bring them to the games.

Tanya:  Then we also have some space for family and friends to stand or sit.  We can call  this space the “Gallery for Parents and Friends”. 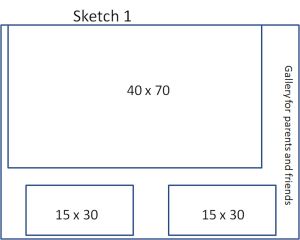 Tinku made a sketch showing the boundaries of the park (60 yards x 80 yards) and a 40 x 70 field for the older children (See sketch 1). That left enough space that he could make two fields each of 15 yards x 30 yards leaving a small space for the Gallery for Parents and Friends.

Tanya: I don’t like Sketch 1 because it gives unfair advantage to the older kids.  They are only 25 players and hogging most of the park.  The two teams of the older players could play each day. The younger children who have 6 teams would have only two fields.  This is not fair since they would get fewer games. There has to be another way.

Jenny: Dad, 8 year olds are supposed to play in a 25 yard x 50 yard field but we said we could make them play with the younger players in 15 x 30 fields.  Can’t we make the older players also play in a smaller field?

George: Yes, they say that when in doubt, slightly smaller fields may be chosen. 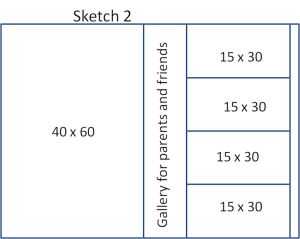 Tanya: I am not happy about Sketch 2 either. I don’t like it.  It’s too squishy. Look, we have two teams for the older players and 6 for the younger one.  So the 40 x 60 field is fine but do we really need four fields for the younger players?  Players from one field will be running into those from the next field.  Can’t we have some space between the smaller fields?”

So Tinku came up with Sketch 3 (see the picture for sketch 3).  Everybody loved it.  It had one field for the older players and three for the younger ones.  That meant that all the players could play at the same time.  The players from one field would not run into those from the next field.  There was also some space for the Gallery for Parents and Friends.

Tanya’s house is on a plot 12 meters wide and 480 square meters in area (see picture of Tanya’s House).  It has a 3 meters x  9 meters front yard, a 9 meter x 12 meters built area of the house and a 3 meters  x 15 meters driveway as shown the picture.   The remainder is the backyard. Tanya wants a big swimming pool (circular pool with a diameter of 9 meters) in the backyard and asks her parents. Calculate the dimensions of the backyard to determine if they have enough space for the swimming pool here.