Tanya knew that she had one nose, two eyes and two hands.  She also knew that her two hands had ten fingers  Tanya’s discoveries continued.

One day Tanya jumped around for the whole day, and then her mother told her to wash her feet.  While washing her feet, Tanya discovered that she had ten fingers (toes) on her feet also – five on one foot and five on the other.  Tanya showed her grandma that she had 5 fingers on the left hand, 5 on the right hand, 5 on the left foot and 5 on the right foot. This way, she learned that after ten comes eleven, twelve, thirteen, fourteen, fifteen, sixteen, seventeen, eighteen, nineteen and twenty. She had twenty fingers in all. Now, every day she counted to twenty.

Tanya phoned uncle to tell him that now she counted to twenty.  She told him that  she was both excited and confused.  He asked Tanya to give the phone to her mother.

Mother to Tanya: So what is your confusion?

Tanya:  What comes after twenty?

Tanya’s mom: Tanya, you are too smart for your age.  That’s a good thing.  After you have counted up to twenty, then you should say twenty one.

Tanya: And then twenty two, twenty three and like that?

Tanya’s mom:  Yes, now that you know this, go to your room and count twenty different things.

A few minutes later, Tanya: I did that mom. Now, what?

Tanya’s mom:  Now, count more items but start counting from twenty one instead of one.

Tanya came back just after a short time and asked: mom, what do I do after twenty nine?

Tanya: I get it mom, thirty, forty, fifty, sixty, seventy, eighty, ninety but what happens after ninety nine?

Tanya’s mom:  After ninety nine comes a  hundred.  Tomorrow, count if we have hundred different things in our whole house.

The next day, Tanya counted hundred items in the house.  She later counted hundred houses in the neighborhood, hundred cars on the road, and so on.  But you know, it never ends.  Today she wanted to count the number of hair strands on the head of her doll. For that she discovered that the number after nine hundred and ninety nine is called a thousand.

Count how many different houses you can see from your windows.

No solution given for this challenge

Count how many stairs to the play room. 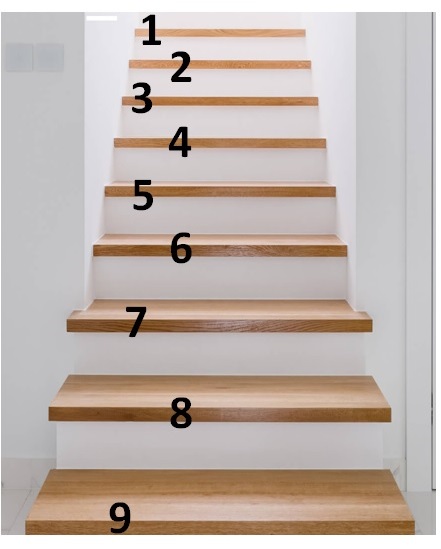 Big family:  How many persons can you count in this family ?