Kate  asked Tinku, Peter and Tanya to come and play in the yard at her house.  Tinku took his new ball.  They threw the ball around and made several games out of it. They did a lot of running and finally got a little tired.  Kate asked her mom to give them something to drink and eat.  Kate’s mom gave them some water saying that this was the best drink in the world. She also told them that if they smiled, she would make them something to eat.  All four had big smiles on their faces.

Kate’s mom brought a basket from the kitchen.  She sat with the children so that they could see what they would get.  She laid down a wooden board and put two long English cucumbers on it. With a sharp knife she cut each English cucumber into two equal size pieces. This gave four pieces of the English cucumber.  She cut each piece again into two pieces, and did the same thing again and again.  This way she had cut them four times (See English cucumber slices picture). 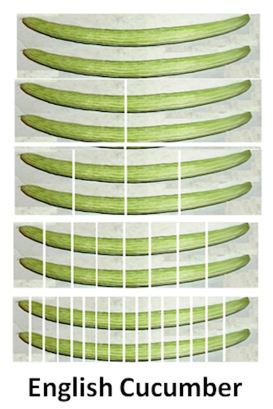 She put the pieces into a large bowl and put some spices on them,  Kate was about to pick a piece when her mom stopped her because she was not done yet.

She gave  the children small bamboo sticks and said: You can all eat from the same bowl but don’t use your fingers to pick the pieces. Use these bamboo sticks.  Each of you should pick a piece together.  That way you will be sure that no one takes more than the others.

How many pieces does each kid get?

All four took their bamboo sticks and picked one piece each in unison.  They were eating and chatting.

Peter:  Kate,  I see you are picking only sweet potato pieces.  I will call aunty and tell her.

Tinku:  I wonder how many pieces in total were there in the bowl.  I want to count.  He had a mental picture of what aunty had done and was now counting.

Peter:  Then, how many pieces did each of us get?

Peter:  Give and take because Kate was hogging the sweet potato pieces.

Tanya:  Yes, and Peter was taking more English cucumber pieces.  Leaving that aside we each got 12 pieces out of a total of 48.  You could also say that each of us got 12/48 or 1/4 fraction of all the 48 pieces. Tinku,  are you satisfied with the numbers now? May be you can write them down.

Peter: Tanya, why do you always have to hurt Tinku’s feelings?

Kate’s mom heard the last line.  She came out and said: Listen, I told you not to fight.  This type of talk is no good.  It is better if you just go home now.

So that ended the day.

There is 24 meter long rope.  Tanya and Tinku folded and cut it so that they have two equal halves.  Then they take each piece of the rope and cut it the same way again.  How many pieces of equal sized ropes did they get?  How long is each piece?

Solution: They cut the original rope into two equal halves.  Then they cut each piece again to get 2 x 2 or 4 equal sized pieces.  The long piece was 24 meters.  Each piece must be 1/4 fraction of the starting length or 24 divided by 4 meters long.  So each piece is 6 meters long.

Auntie Deepika loves her brother’s kids Nimmo, Dipu and Chetan.  She loves Nimmo the most because she is the youngest one.  She sent a big box of chocolates for them with the note: one fourth of all the chocolates are for Chetan, one third for Dipu and the rest are for my lovely niece Nimmo.  Love you Nimmo.

Nimmo wanted to know how many chocolates she got before calling auntie and thanking her.  She opened the box.  Chetan counted that there were 48 chocolates in it.