Ms. Rania Ali taught in a school located in a slum.  The kids had very little interest in learning.  Ms. Ali was aware of her challenge but the great teacher found new ways to get attention of her students.  Today she was at a loss. She did not know how to approach the next geometry lesson until she saw something on the principal’s desk.  She asked the principal to borrow the doll on her desk.  The principal agreed but asked Ms. Ali to make sure to return it.

Ms. Ali came to the class and put the doll on the teacher’s table.  Of course, all the  boys and girls were curious why Ms. Ali would bring a doll to the class.

Ms.  Ali: Class, I have this special doll to show you.  Some of you may have already seen it in the principal’s office. It is a babushka doll. This doll can be opened.

She opened the Babushka doll.   There was a second doll inside. She took it out and closed the first doll. Then she opened the second one and took out a third doll. She repeated the process two more times. She laid all the five dolls on the table.

Many students had never seen a babushka doll before and were mesmerized.  Everyone in the class liked the display until Barak spoke up.

Barak: Ms. Ali, all the five dolls are the same.

Mehak: No they are not. They are all different in size.

This followed a class discussion, and the agreement was that all the five dolls were similar because they had the same shape and design.  They would be identical if they were all of the same size too but then they could not go one inside the other.

Ms.  Ali:  Very good class.  If one of the dolls was lying down and the others were upright. Would they still be similar dolls?

Ms. Ali:  Here is a picture of different cookies.  Which of them are similar to each other.

Arisha:  They are all different in shape.  So no cookie is similar to any other.

Arisha:  I could flip around any of the cookies and they would come out to be similar.  Cookies 1 to 6 are of the same size but 7 and 8 are smaller but still similar in shape.

Ms. Ali:  Rehan, you have been quiet.  Tell me if cookies 1 to 6 are similar and also the same size, would you say they are identical.

Rehan:  Yes, I could flip them and stack them one on top of the other. Cookies 1 to 6 would all come out to be exactly the same.

Ms. Ali:  In geometry, we would say that triangles 1 to 8 are similar but triangles 1 to 6 are also congruent. I want to add that the concepts of similarity and congruence apply to all the shapes – not just to the triangles. Here is an example with quadrilaterals.  Mehak, tell me which of these figures are similar and which are congruent?

Ms. Ali: Similar but not congruent.  I am impressed with your thinking.

Advantage in understanding the similarity

Taheen:  Thank you Ms. Ali but I don’t understand what is the big advantage is in understanding the similarity idea.

Ms. Ali: I drew two similar triangles – triangle 1 and triangle 2.  They are similar because angle BAC of triangle 1 equals B’A’C’ of triangle 2, angle ACB equals angle A’C’B’ and, therefore, the third angle CBA = C’B’A’.  Now if ratio of the sides AB of triangle 1 and A’B’ was two, who can tell me the ratio of BC to B’C’, and AC to A’C’?

Feran: 2 because if the ratio of any of sides was different in one triangle, it would change its angle and the triangles will no longer be similar.

Ms. Ali:  Very good.  From the number of students who had raised hands, I think everyone got this idea.  Taheen, so the advantage is that you do not have to measure all three sides, their ratios will be the same.  Although I used triangles to show the constant ratios of sides, the idea applies to any shapes.

The bell rang and the students disappeared without Ms. Ali dismissing the class.

ABCD is a square.  Show that AD is perpendicular to BC.

The triangle ABD is an isosceles triangle because AB = BD.  Therefore, angles DAB and ADB are equal.   Triangles AEB and DEB are congruent because AB = BD (given), side EB is common to both and angles DAB and ADB are equal. Therefore, angle AEB = angle BED,  But angle AEB = angle AEC and angle CED and angle AEB (opposite angles).  Therefore the angles AEB =  angle BED = angle DEC = angle AEC. Together, these angles form a complete revolution = 360°.  Hence each of the angles is 90°.  Hence line AD is perpendicular to BC. 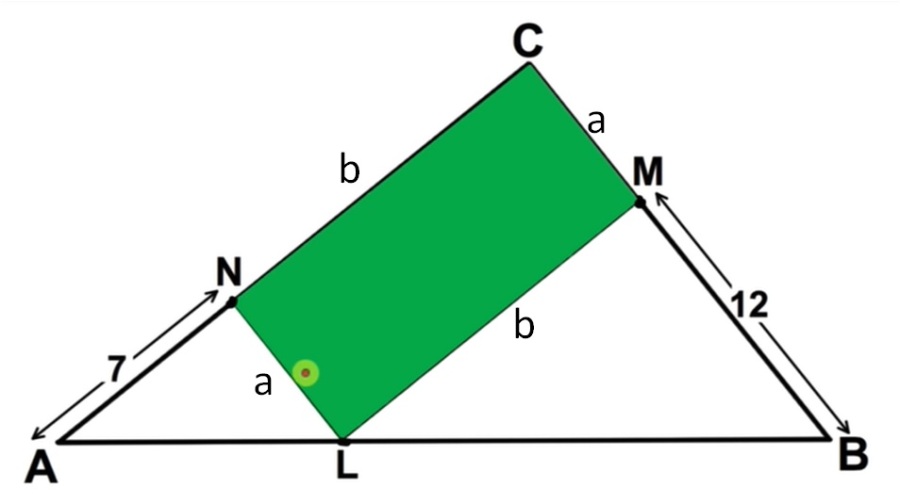 Note that angles at each corner of the rectangle are 90⁰.

AC and LM are parallel being opposite sides of a rectangle.  Therefore, the corresponding angle ∠NAL = ∠MLB.

The figure shows the triangle ABC and the semicircle on   BC inscribed in it.  Draw a perpendicular DE from the center of the circle on  AC and EF on AB.

Since CDE and EFB are right angle triangles, ∠BEF  also equals ∠DCE. Therefore, these are similar triangles  and their corresponding sides have the same ratios:

Cross multipiication of the two sides  of the equations by  gives:

Math Stories For You