Priya and her new job

Jenna’s store sold a variety of T-shirts. They also designed  and printed  them.  Several sports teams got their T-shirts made there.

Jenna’s daughter Priya was in grade 10, and was looking for something to do.  Jenna suggested that she could get business training working at the shop and get paid $14 per hour.  At first, Priya didn’t want to design T-shirts but she agreed because she wanted the money.

Jenna was in the back of the store working.  Priya was at the front desk. A girl and a boy came to the store and introduced themselves as Kirsten and Jonathan.  They wanted to get 50 T-shirts made with a design patched on.  They asked if their shop could do it, what the cost would be and how long it would take.

Kirsten and Jonathan’s details of the design

Priya asked Kirsten and Jonathan about details of the design and the sizes of the patches.  Kirsten said that the sides of the triangles would be 3, 4 and 5 centimeters, and one of the squares would have sides of 3 centimeters, the second 4 and the third would be 5 centimeters. They  drew the design.  Priya, took a piece of cloth and put it on the table as if it was a large T-shirt. Then she cut pieces of construction paper on it to match the design. 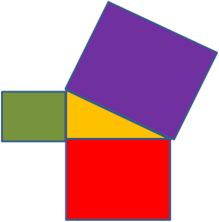 Kirsten and Jonathan looked at the design on the table and asked how big the cloth was.  Priya told them that it was about the size of the front of a medium sized T-shirt.

Kirsten and Jonathan said that the patches needed to be bigger.

Priya told them that she could help them better if they told her more about their need.

Kirsten said, “Our school has started a new Math Club. Any students from the school can join. Most students who join are from grades 11 and 12, and some are from grade 10. After a discussion, the members decided on a unique name for the club and called it Pythagorean Triples. Pythagoras proved that for a right angle triangle, square of hypotenuse is the sum of squares of the other two sides.  A Pythagorean Triple is a right angle triangle and all its sides are whole numbers. The first triple has the sides 3,4,5 because 52 = 32 +42. The next triple has a weird shape for our design. It would be 5,12,13 (132 = 52 +122). Besides, the school address is 345 Triangle Park. That’s why, we came up with this design.”

Priya listened to the long explanation, smiled and said that she could easily meet all the criteria.

Priya: If 3,4,5 centimeters meet your criteria, so would 3,4,5 inches.  The patches would then be bigger as you want them.

Jonathan: why didn’t we think of that?

Priya: Because we are the custom T-shirts guys and you are the math club members. Does the triangle have to be yellow or can it be just the colour of the shirt.  It will show as the triangle because of all the squares around it, and it will save you some money in cost of the patches and in labour.

Priya checked the whole sale prices of the shirts and the patches.  She showed them to Jenna who looked at them and added the labour cost, store profit and the sales tax.

Jonathan and Kirsten figured that $600 total to be $12 per student and said that was too steep.

Priya: How rigid are you about having patches? Would printing not be a better option?  It might even bring the cost down.

Jonathan: No.  We want patches.

Priya: We can do patches but I want to show you some of our printing work.

Priya brought several T-shirts made of really good soft cotton.  They had different designs. Kirsten was getting warm to the idea.

Priya:  You know your original design had  a yellow triangle in the middle. We had cut it out to save the cost.  In printing, we could keep the original design.  Normally, we charge $10 per shirt but since you want 50 shirts, I will ask my mom if she can give you a discount.

Jenna told Priya that the store would pay the sales tax as the discount.

Priya: We will pay the sales tax.  So it would be a total of $500 for the printed shirts.

Kirsten: Jonathan, remember our math teacher told us that the school could chip in $300 if we make a really good presentation about the project to the Principal.  This would bring the cost down to $200 and come to $4 per student which would be nice.

Jonathan: We will order the 50 printed shirts.

Now, the math club had to prepare the presentation to impress the math teacher and the Principal.  Pete said that he would help because the design was his idea.

What would you do if this presentation was for your school?

Pythagoras theorem states that for a right angle triangle the hypotenuse square equals base square plus height square. Prove it.

Solution: There are many proofs of the theorem, This one was given by the 20th  US President James Garfield in 1876.

ABC is a right angle triangle with the base AB = a, height AC = b and the hypotenuse BC = c.

Extend the line AC to D so that the line segment CD is of length a (same as the base).  Draw a right angle CDE from CD so that DE = b.

Therefore the triangle BCE is a right angle triangle.

The  area of the trapezoid ABDE is the sum of the areas of the right angle triangles ABC + CDE +BCE.

This proves the Pythagoras theorem that for a right angle triangle,