Johnny belonged to an upper middle class family. He was very sociable and dressed well. One thing unique about him  was his fondness for different types of bikes.  When Johnny was 18 months old, his parents got a him little baby tricycle.  He loved it.  He played with most of his other new toys for short periods but he loved playing with the tricycle.  He would carry it around and ride it all over the house.  This lasted for a little over a year when he saw bicycles in a toy shop. He really wanted one.  So on his third birthday, he got a bicycle with two training wheels.  He would decorate the bicycle with fancy stickers, and ride it all over.  He even insisted that he be allowed to ride it outside.  So, he was allowed to take the bike to the backyard. This went on for another year when he wanted the training wheels off.  He was told that he would have to wear a helmet.  He agreed and the training wheels came off – one wheel and then a few weeks later the other.  Johnny got his next bike when he was seven.  He rode this bike all over the neighbourhood.  He was allowed to do this because their house was on a dead end street.  As he grew up and became taller, he got new bikes from his parents or grandparents once every two to three years.  He loved them.  Now Johnny is in high school.  He has developed a real obsession for bikes and their newer technologies – the advanced materials with which they are built, their kinetic nuances, and the bells and whistles these bikes come with.

Johnny also had a girl friend named Sara. Sara and Johnny loved each other.  Sara was the daughter of Vijay and Sonia – both software engineers who moved from India to North America.  Life was difficult in the beginning but they worked hard and settled well.  Sara was practically raised by her Nana (grandmother) who lived with them.  She was a bright student – a slim girl with shoulder length hair, she dressed well but modestly. Sara and Johnny had been together for almost two years now.  They lived in the same neighborhood. They visited each other often, and on most days they also walked to school together.

Johnny wanted a new bike but had no money

One day, while surfing on the Internet, Johnny saw an advertisement for a bike that he thought was perfect for him. Wanting a bike was fine but having the $2800 to pay for it was no more than just a dream.

When Sara came over, Johnny told her about the bike and its cost.

Sara: What is it made of – gold?  Why is it so expensive?

Johnny:  The bike has a strong titanium frame and is very light.  It has an excellent aerodynamic design and great technological features.  It has a gyroscope which tells you how many degrees your bike has turned.  Look at this feature, you can even calculate how many meters you have moved North/South and how many meters East/West.  Don’t you see? It’s marvelous.  I love it.   Normally, it is about $7000 but it is on sale at $2800.

Sara: Do you have that kind of money?

Sara:  Did you ask your dad?

Johnny’s dad happened to be nearby and overheard Sara.  He said: Ask me what?

Johnny said:  Nothing dad.  We were just talking about this beautiful bike.  I love it but it costs $2800.

Johnny thought that this to be the end of that conversation until later in the evening when his dad said to him, “I talked to your mom about the bike. We’ll get the bike for you but on one condition.  This semester you will have to get a grade average above 85%.  If you don’t, you will have to work in the summer to pay us back the whole amount.  Think of this as an incentive for doing well in the upcoming semester.”

Sara, will you help me get an A in Trig?

Johnny accepted his dad’s condition even though he had not done so well in the past. He thought that he would be okay with the other subjects but he was worried about Trigonometry (Trig).  He always got only mediocre marks in math courses but he knew that Sara was a math whiz.  He wondered how much she could help him.  So, he told the whole story to Sara, and then said, “Sara, will you help me get an A in Trig?  Otherwise, I might have to pay for the bike.”

Sara thought about all the technological features on the bike, especially, the gyroscope. She had already glanced over their Trig book. She devised a plan in her head and then said,  ” Johnny, I love you. I’ll do anything for you. I’ll even make you a Trig whiz.”

Johnny went with his dad and they bought the bike.  He thought the bike was much better than he had expected.  He also loved all its features.  He phoned Sara and asked her to come over. Sara came dressed in her usual half sleeved T-shirt and skirt but Johnny thought that she looked really sexy today.  She had come smiling because she shared her boyfriend’s  happiness for the new bike.  Then Johnny showed her the bike.  Sara did not know much about bikes but she loved that Johnny was happy.

Johnny: Why were you so sure that you could make me a Trig whiz?

Sara: You will see. It’s a nice day.  Let’s go to school.  You ride your bike and I will meet you there.

Johnny: Ok.  See you at school.

The round school building

Sara had drawn this picture for Johnny (Fig. 1.1). The school building had a circular road around it. On this road, you could ride the bike or walk around the school building. Inside the school, you could also walk across from the front to the back which would be from South to North.  There was another walkway from the Eastern end of the building to the Western end. You could walk from the center of the school to the circular road on these paths and in any direction it was 100 meters to the road.

Sara and Johnny went to the East side of the building (see arrow).  Johnny had his bike in his right hand and his left arm was wrapped around Sara’s waist. What more could he ask for?  He had all he wished – his lovely bike and the beautiful girlfriend he loved.  Johnny reset his bike so that it showed zero for both – the distance moved and the rotation. They were walking slowly like two little lovebirds. Johnny was surprised when Sara asked him to stop. He looked at the bike – the rotation angle had reached 45°.   He read from the bike meter that they had gone 70.7 meters towards North.  After this Sara walked home and Johnny went for a bike ride.

Later at Johnny’s house, Sara drew some lines on the old picture.  It showed the point of start and the 45° rotation they had made.  She also drew a line connecting the center of the building A to their current position C.  Because the road was circular, this line would also be 100 meters long.  Then she drew another line from A towards the arrow.  Then from C she drew line perpendicular to that line.  Now the angle BAC was 45°, and the angle CBA was 90°.

Sara drew a triangle in the school picture

Johnny: Why did you draw the triangle on the old picture?

Sara:  Trig is about triangles, actually it’s mostly about right angle triangles. Johnny, can you make out where we started walking and where we stopped and made the 45°angle BAC?

Johnny:  Yes, I can. By the way, the angle ACB will also be 45° because all the angles in a triangle have to add up to 180°. I remember that from my geometry class.  That would make this an isosceles triangle and the sides AB and CB would be equal.

Sara kissed him and then said: Johnny, you are a genius.  Do you remember the Pythagoras theorem from the geometry class?

Johnny: Kind of. I remember that its proof was hard.  Also that it was about right angle triangles.

Sara: Yes.  From Pythagoras theorem AC2 = AB2 + CB2  because AC is the hypotenuse of the right angle triangle and AB and CB are the other two sides.

Johnny: Wow, those are the actual readings from my bike.  I went 70.7 meters North and 29.3 meters West from our starting position on the East side of the school.

Sara: This means that your bike readings agree with our calculations.

Johnny: Okay, all that’s great but where’s any Trig in there?

Sara: Trig is to Geometry what Algebra is to Arithmetic.

Johnny: What does that mean?

Sara:    For a right angle triangle with an angle BAC (or angle A), we can write these expressions in geometry and trigonometry

Johnny: What is the big deal of writing all these conversions?

Sara:  Genius.  You are becoming a Trig whiz. The advantage is that we can write a geometric expression in a much shorter form which is easier to follow just like you can solve more complex arithmetic problems using algebra.

Sara’s phone rang.  Her dad wanted her to come home for dinner.  Sara kissed goodbye to Johnny and left.

Johnny got his Trig book to go over the meanings of the different Trig functions.  He was getting more confident and zealous to learn more.  He was impressed how Sara had used the gizmos (although that’s not what he called them!) on his bike to teach him Trig.   He was so happy.

Challenge: Johnny and Sara decided to go up the Mountedge Terra Park.   From where they were standing, there were two ways to go up – take a road or a set of stairs.  Sara wanted to climb the stairs. The walkway and the stairs were all in the same direction. The sign said that she would have to first walk 320 meters and then climb 600 stairs – each stair being 30 cm horizontally and 25 cm vertically.  Johnny rode his bike on the road from the same point and met up with Sara.  Of course, Johnny reached must faster and was waiting when Sara reached the top. Johnny asked Sara what she thought was the angle of incline of the road that he came by.  Sara is still huffing and puffing from climbing the 600 stairs?  Can you figure this out for Johnny?

Challenge: Joe’s mother runs a bakery shop. They sell these delicious pistachio walnut squares for one dollar per piece – they call them squares but they are actually triangles.   She first cuts the pastry into  50 cm long and 2.5 cm wide pieces.  Then she cuts each long piece into square pieces and makes the final cut to make right triangles out of them with a 2.5 cm base and an angle of 45° opposite to the right angle.  This way she gets 40 pieces from each 50 x 2.5 piece. Profits are down because the material to make the pastry is now more expensive.  Joe’s mother thinks that kids love the price of one dollar per piece and does not want to change that.  She does not want to change the recipe or the thickness of the pastry pieces.  Joe suggests that she cut the 50 cm long and 2.5 cm wide pieces into 2.5 cm wide rectangles and then cut the triangles such that the angle opposite to the right angle is 41° and the angle opposite to the base is 49°.  This would give her more pieces and even the design might look a little fancier. 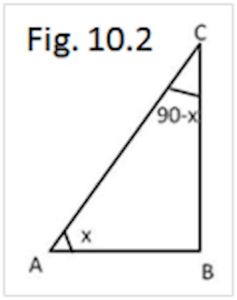